The earliest reference to a Continuous ink jet ink (CIJ) in the 1971 patent US3596285A states " The preferred ink is characterized by viscosity and surface tension characteristics such that the liquid will be maintained over span under the force with which it is moving in bridge or stream. Implicit in such requirement is that the pressure applied to the ink in formation of said stream is sufficient to form a jet and to impart enough energy to carry the jet as a continuous liquid mass notwithstanding the defective forces which are or may be applied. Furthermore, the color of the ink and the color of the carrier should be such that good optical contrast is formed there between the following printing. The preferred ink is a "hot melt type. That is to say it will assume a solid phase at the temperature of the carrier and liquid phase at some higher temperature. The range of commercially available ink compositions which could meet the requirement of the invention are not know at the present time. However, satisfactory printing according to the invention has been achieved with a conductive metal alloy as ink. It is extremely hard at room temperature and adheres well to the surface of the carrier.

The basic problem with inkjet inks is the conflicting requirements for a coloring agent that will stay on the surface vs. rapid dispersement of the carrier fluid.

Desktop inkjet printers, as used in offices and homes, tend to use aqueous inks based on a mixture of water, glycol and dyes or pigments. These inks are inexpensive to manufacture but difficult to control on the surface of media, often requiring specially coated media. HP inks contain sulfonated polyazo black dye (commonly used for dyeing leather), nitrates and other compounds. Aqueous inks are mainly used in printers with thermal inkjet heads, as these heads require water to perform the ink-expelling function.

While aqueous inks often provide the broadest color gamut and most vivid color, most are not waterproof without specialized coating or lamination after printing. Most Dye-based inks, while usually the least expensive, are subject to rapid fading when exposed to light or ozone. Pigment-based aqueous inks are typically more costly but provide much better long-term durability and ultraviolet resistance. Inks marketed as "Archival Quality" are usually pigment-based.

Some professional wide format printers use aqueous inks, but the majority in professional use today employ a much wider range of inks, most of which require piezo inkjet heads and extensive maintenance.

The main ingredient of these inks are volatile organic compounds (VOCs), organic chemical compounds that have high vapor pressures. Color is achieved with pigments rather than dyes for excellent fade-resistance. The chief advantage of solvent inks is that they are comparatively inexpensive and enable printing on flexible, uncoated vinyl substrates, which are used to produce vehicle graphics, billboards, banners and adhesive decals. Disadvantages include the vapour produced by the solvent and the need to dispose of used solvent. Unlike most aqueous inks, prints made using solvent-based inks are generally waterproof and ultraviolet-resistant (for outdoor use) without special over-coatings.The high print speed of many solvent printers demands special drying equipment, usually a combination of heaters and blowers. The substrate is usually heated immediately before and after the print heads apply ink. Solvent inks are divided into two sub-categories: hard solvent ink offers the greatest durability without specialized over-coatings but requires specialized ventilation of the printing area to avoid exposure to hazardous fumes, while Mild or "Eco" solvent inks, while still not as safe as aqueous inks, are intended for use in enclosed spaces without specialized ventilation of the printing area. Mild solvent inks have rapidly gained popularity in recent years as their color quality and durability have increased while ink cost has dropped significantly.

These inks consist mainly of acrylic monomers with an initiator package. After printing, the ink is cured by exposure to strong UV-light. Ink is exposed to UV radiation where a chemical reaction takes place where the photo-initiators cause the ink components to cross-link into a solid. Typically a shuttered mercury-vapor lamp or UV LED is used for the curing process. Curing processes with high power for short periods of times (microseconds) allow curing inks on thermally sensitive substrates. UV inks do not evaporate, but rather cure or set as a result from this chemical reaction. No material is evaporated or removed, which means about 100% of the delivered volume is used to provide coloration. This reaction happens very quickly, which leads to instant drying that results in a completely cured graphic in a matter of seconds. This also allows for a very fast print process. As a result of this instant chemical reaction no solvents penetrate the substrate once it comes off the printer, which allows for high quality prints.[13][14] The advantage of UV-curable inks is that they "dry" as soon as they are cured, they can be applied to a wide range of uncoated substrates, and they produce a very robust image. Disadvantages are that they are expensive, require expensive curing modules in the printer, and the cured ink has a significant volume and so gives a slight relief on the surface. Though improvements are being made in the technology, UV-curable inks, because of their volume, are somewhat susceptible to cracking if applied to a flexible substrate. As such, they are often used in large "flatbed" printers, which print directly to rigid substrates such as plastic, wood or aluminium where flexibility is not a concern.

These inks contain special sublimation dyes and are used to print directly or indirectly on to fabrics which consist of a high percentage of polyester fibres. A heating step causes the dyes to sublimate into the fibers and create an image with strong color and good durability.

These inks consist mainly of waxy compounds which are heated past their melting point to enable printing, and which harden upon hitting the cooled substrate. Hot melt inks are typically used for masking processes and are found in graphic printing.[15][16] :The earliest Hot melt type ink was patented in 1971 by Johannes F Gottwald, US3596285A, Liquid Metal Recorder was intended for printing. The patent states" As used herein the term printing" is not intended in a limited sense but includes writing or other symbol or pattern formulation with an ink. The term ink as used is intended to include not only dye or pigment-containing materials, but any flowable substance or composition suited for application to surface for forming symbols, characters or patterns of intelligence by marking. The materials employed in such process can be salvaged for reuse. Another object of the invention is to increase the size of characters.....in terms of material requirements for such large and continuous displays". 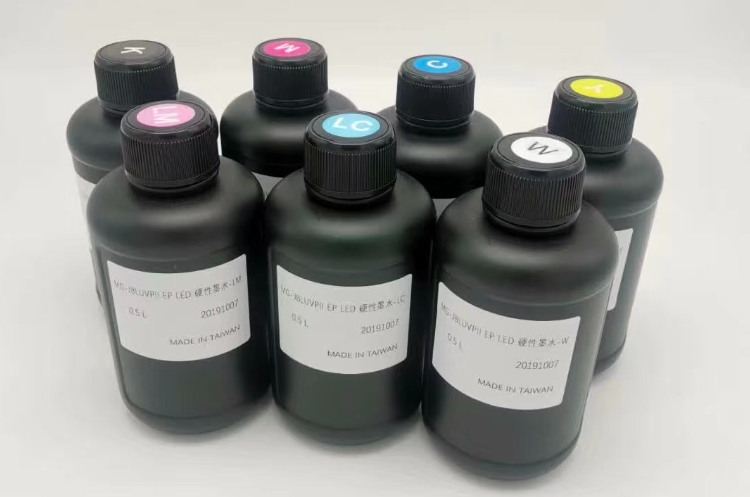